Why Do Dogs Bury Their Heads Into Things?

By Aviram K.
Published in Training & Behavior
July 31, 2021
5 min read
✏️ This article has been reviewed in accordance with our editorial policy.
🏥 The information in this article is not a substitute for professional help.

You’re lounging around on the couch after a long day when your pup hops up and starts to frantically bury their head into the cushions!

What does that mean? Why won’t they just chill with you?

Dogs bury their heads into things when they’re being playful, feeling affectionate, expressing empathy, marking their territory, or sleeping cozily. However, the dog may also be showing signs of stress, fear, anxiety, or discomfort. Context is essential to determine if they are doing it for positive or negative reasons.

In this article, I’ll uncover the mystery of why pups insist on covering their heads and burying their nose, whether it be in your arms or under blankets and pillows.

Why Do Dogs Bury Their Heads in Blankets or Pillows? 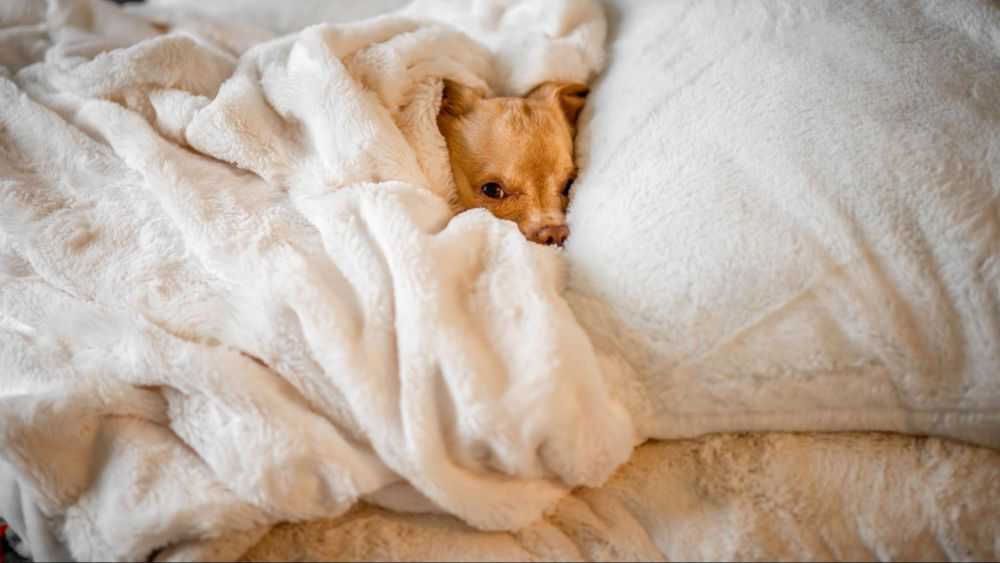 The burrowing, the burrito, the rolly-polly hustle to get under the blankets or pillows are just some of the ways dog owners describe what their pups are doing.

Usually diving nose-first, pup parents know the familiar dive into the sheets and insist that this is their pup’s favorite spot in the house. But, believe it or not, coziness is not the only reason dogs bury their heads.

For some dog breeds, burying their heads is in their blood. Terriers are an entire group of dog breeds created to go underground, with the term terrier itself being French for ‘burrowing’. Other breeds, such as the Spitz family, also burrow out of instinct.

If you pay close attention to the behavior, often those dogs will first search above ground for their proper burrowing spot, then proceed to dig in nose first and finish by propelling their entire bodies under the blankets. This simulates what the dog’s genetics tell them to do in dirt to get underground - with blankets and pillows being the closest resemblance in their owner’s home! 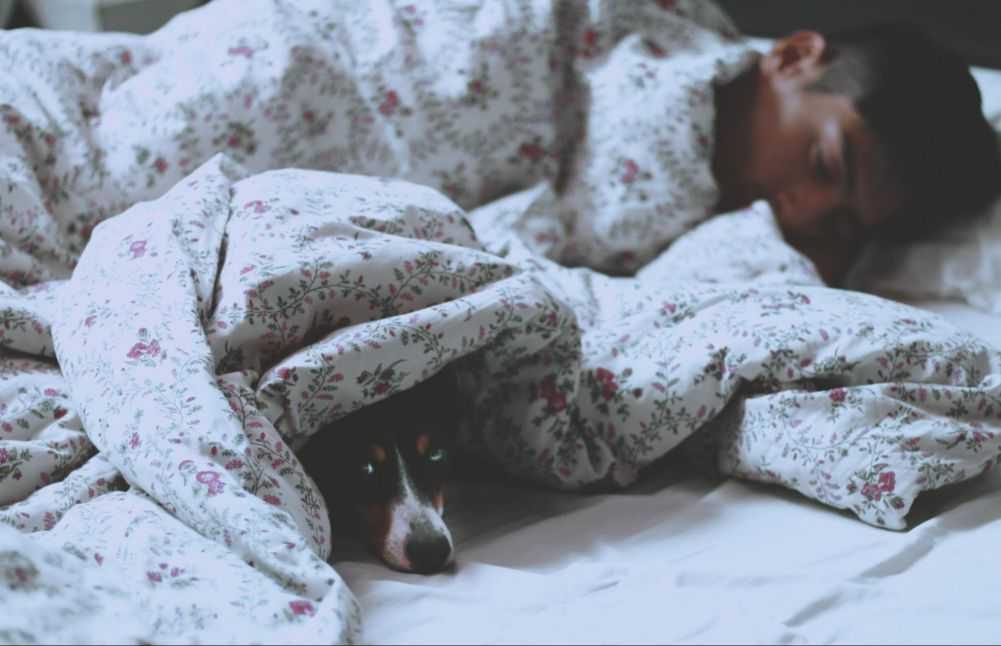 Some dogs burrow because they are afraid or anxious, and being curled up in a hole makes them feel safe. This is seen frequently in smaller breeds such as chihuahuas; being surrounded by a make-shift den provides a feeling of protection. This is a self-soothing mechanism.

You can identify if the behavior is due to anxiety by observing the context of what happened. For example, loud noises, overstimulation from large groups of guests, or even pulling out the vacuum cleaner are common reasons dogs run to hide in the pillows.

Why Do Dogs Bury Their Nose When They Sleep? 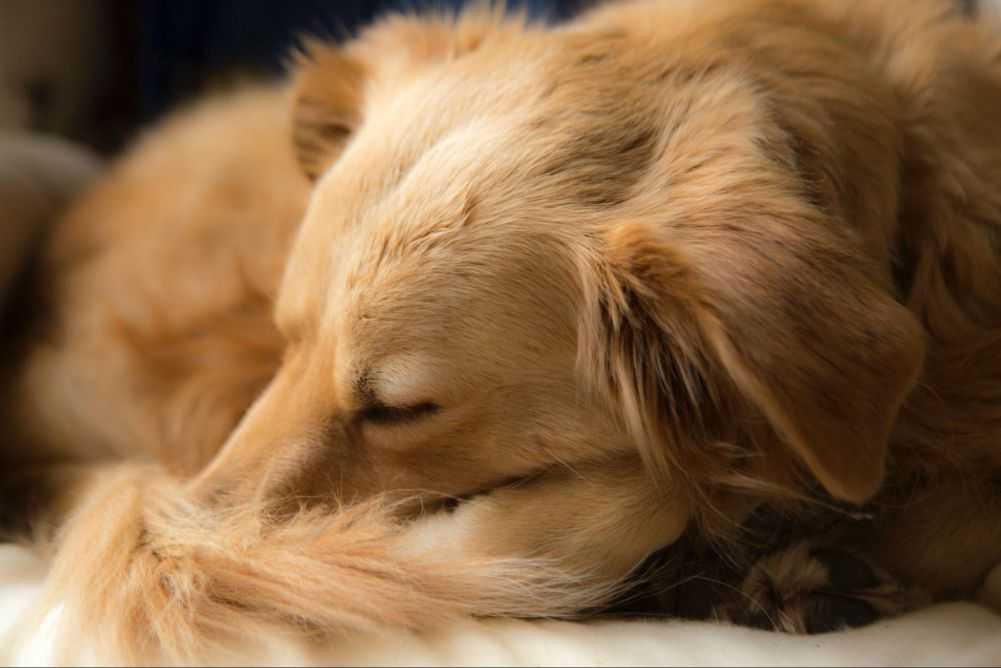 Arguably the cutest thing in the world is a dog sleeping - and if you’ve watched your serene pup snooze away, you likely noticed that their nose is often hidden from sight. Dogs hide their noses in slumber because the nose is a very sensitive part of the body.

Instinctually, dogs will hide their nose, and their belly as these two areas are the most prone to significant damage if something were to happen - a natural response tracing all the way back to frolicking wolves in the wild. A dog’s nose being hurt is very painful!

Even though our domestic pups have nothing to worry about, this lingering desire to keep the nose hidden remains. This is also why a dog raising their belly up to you is a sign of respect and trust, as that is a very sacred place.

If your pup is tightly curled around their nose or stuffing their nose into a fuzzy blanket, they’re likely just warming themselves up or ensuring their body temperature stays at the same consistent level.

Exposing their nose to cold will send a chill down their spine, as the nose is a very advanced heat sensor. Likewise, exposing the nose to something very warm will start the cooling process (moisture on the nose evaporates to lower body temperature, much like sweat is intended to do for us).

Sometimes, dogs bury their nose along with their eyes because their sleeping quarters are too bright! Maybe the window is open during a bright sunny day, maybe we left the lights on in the room, whatever the reason - it’s too bright to comfortably sleep.

Lastly, puppies can pick up the habit of hiding their nose or face in something if they observe their human doing it too! Believe it or not, if you sleep with your head shoved into a pillow, your puppy may imitate you and do the same. Puppies learn from observing those around them. Studies have shown that they are pretty adept at mimicry. Eventually, this can lead to a life-long habit.

Why Do Dogs Bury Their Face in the Couch? 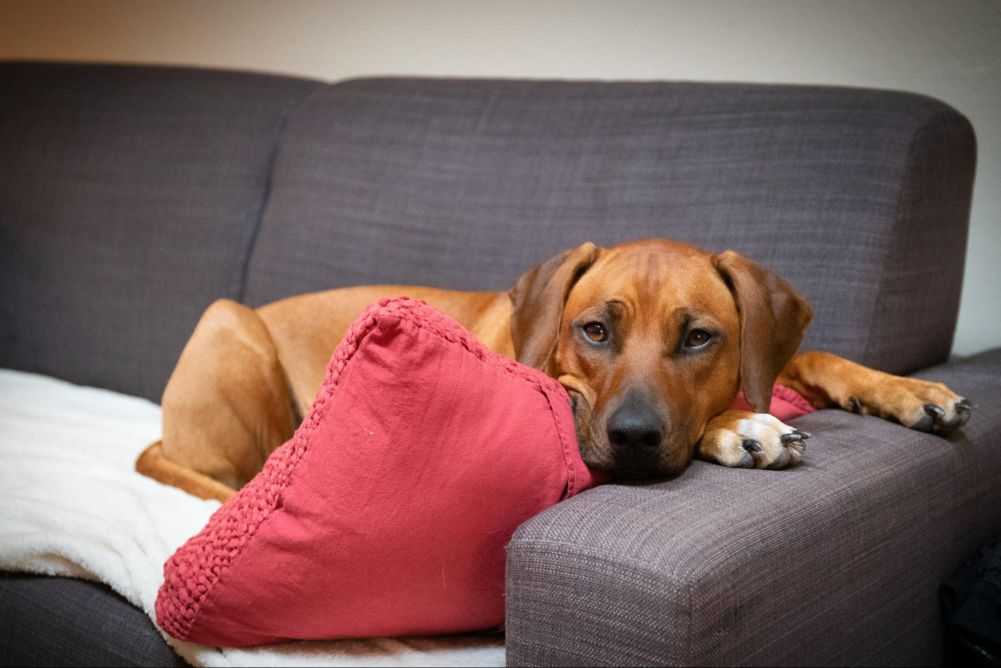 Let’s face it: as much as you try to keep the house ‘yours’ when you have a dog, every part of the home becomes ‘theirs’ too. This includes leaping into the couch and burying their faces! The reason that dogs want to be a part of every place you reside or interact with is the same reason that dogs shove their faces into every cushion on the couch.

The reasons we mentioned above for burrowing, such as comfort, anxiety, temperature regulation, and instinct, all apply to digging into your couch cushions as well. But a big reason that couches become a bit more special to a dog is because of smell. This is also why dogs want to involve themselves in everything we interact with.

Dog noses are much more powerful than ours and for the right reason. Smell is a frequent way that canines communicate with one another, so their scent receptors have to be very good!

If you frequently lounge on the couch, then I can guarantee your smell is all over it. A dog with a very affectionate relationship with you will come over and want to sniff and roll around in your smell, whether that be for comfort reasons or otherwise.

Equally so, dogs want to mark their territory and ensure other animals understand that “this, right here is mine”. By rubbing or burrowing their noses into couch cushions, they can leave their scent behind, effectively marking the territory without having to urinate on it. This is a sign of dominance. Dogs frequently pick spots that their owners use to rub those nose scent markers!

Why Does Your Dog Push Their Head into Your Legs, Armpits, or Lap? 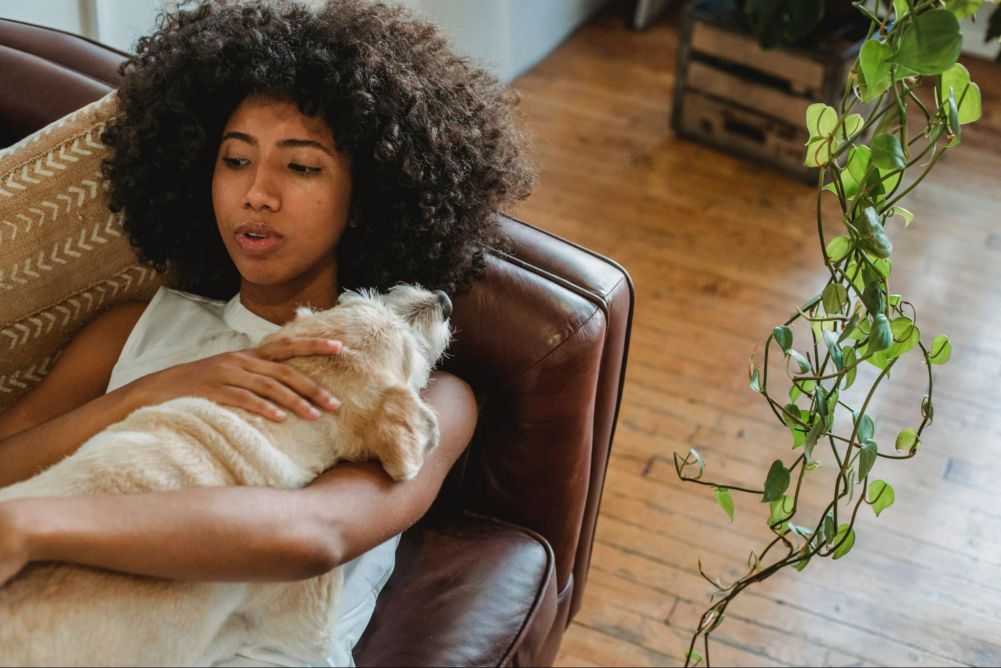 Besides inanimate objects, pet owners know that their pup loves to dig their cold, wet noses into us all the time - especially into our tickle zones such as our armpits, lap, and legs!

The reason for this is all of the same manifestations for burrowing into cushions, blankets, and more - just on a much more significant scale.

Dogs are pack animals, so their relationship with us is significant to them. Shoving their heads into our various body parts is a way to express affection, display their deep love for us! Puppies do this often to bond with their person. Plus, being engulfed in our scent (and leaving their behind, too) is an added bonus for them.

Us, humans, pick up on this reason for burrowing and can unintentionally (or intentionally, depending on the individual) reward this behavior. We reward it by giving them a nice scratch in the best spot, expressing happiness in our tone of voice, or even calling our pup over and trying to encourage that behavior.

Dogs often seek comfort by getting as close as possible to us, hiding their faces into whatever crevice or nook our body creates (which is why the armpit is a popular choice). Feeling our warmth and life can help with a dog’s self-soothing.

But, you will frequently witness this behavior displayed in dogs that suffer from separation anxiety. Separation anxiety is when a dog becomes distressed because you have left their presence. This can come about in howling, crying, destructive behavior, and overall stress and anxiety. You can figure out if this is the reason behind the behavior if your dog buries their head into your specifically around the times when you are packing up to leave somewhere.