Why Do Dogs Lick Cats?

By Aviram K.
Published in Training & Behavior
June 23, 2021
5 min read
✏️ This article has been reviewed in accordance with our editorial policy.
🏥 The information in this article is not a substitute for professional help.

You may be puzzled by the fact that your dog has just licked a cat. Aren’t they supposed to be mortal enemies?

It is true - cats and dogs are very different animals with sometimes conflicting instincts that can put the two animals at odds.

However, dogs and cats are not inherently enemies and can forge strong bonds in a domestic setting.

A dog licking a cat is a sign of affection and a dog’s way of showing that they consider the cat a part of the pack. Especially if the two have been around each other for a while. However, it may also be because the dog likes the cat’s scent.

In this article, I’ll take a closer look at this behavior and explore the subtle reasons behind it.

Table of Contents
01
What Does It Mean When Your Dog Licks Your Cat?
02
Cats Don't Like It – But They Allow It
03
How Do You Know Your Dog and Your Cat Like Each Other?
04
Isn’t It Adorable?

What Does It Mean When Your Dog Licks Your Cat? 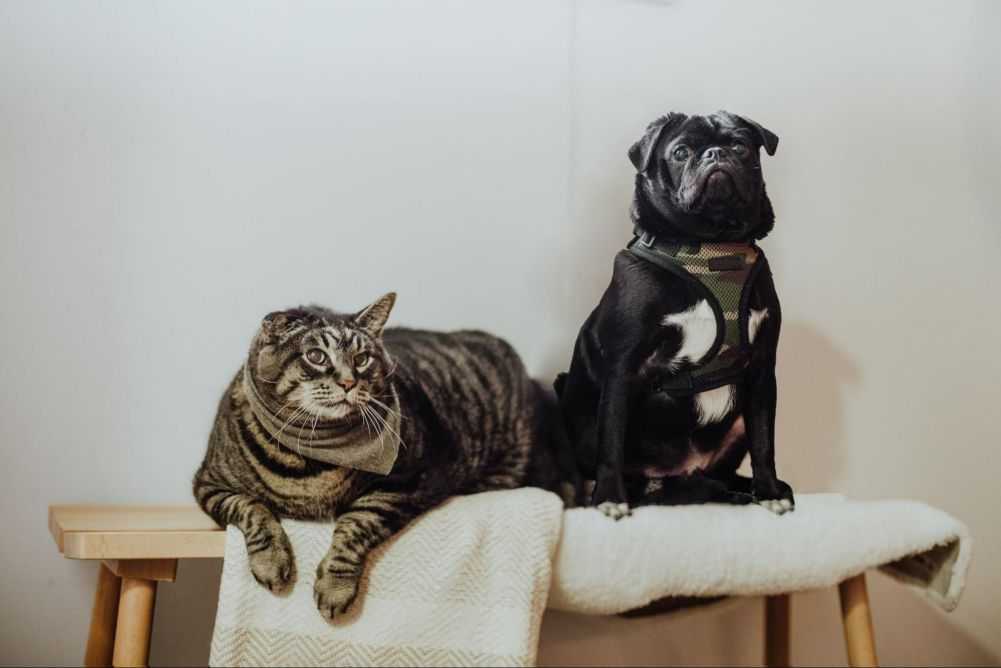 Most people grow up thinking that cats and dogs are mortal enemies. Childhood cartoons are partly to blame for this myth. As a result, it may be surprising to see your dog licking the cat.

But, relax, there is nothing to worry about. Here are four possible explanations for this behavior.

Dogs are very responsive to positive reinforcement. That is why the Humane Society of the United States recommends it as the best dog training method.

Trainers use treats, toys, and praise to make the dog associate the desired behavior with a reward.

For instance, if you call your dog a good boy or pet it when they lick, they may be more inclined to do it again.

The same goes if you reward them when they lick the cat.

The dog soon learns that licking the cat or person earns them a treat. They don’t do it for love but treats.

A positive response doesn’t have to be from people. The cat can also instill positive reinforcement by licking them back or cuddling. After a while, it becomes instinctive.

Dogs have a superior sense of smell to humans. Experts estimate that dogs have 300 million olfactory receptors while human receptors are only six million.

A dog’s superior sense of smell makes it their tool of choice for exploration and discovery. If your cat has an interesting scent, the dog may find out more by licking the feline.

The cat may have gone through the pantry, or someone poured soup on them. We may not be able to smell it, but the smell might be overpowering to the dog. If the dog is licking the cat excessively, that may be the reason.

The poor dog probably thinks the cat has some food on them.

Most hunting animals live in groups. A prime example is wild dogs and coyotes, and these instincts remain in animals even after domestication.

Licking among members of the same pack often indicates submission. The submissive party licks the superior member of the group. Your puppy licking your cat could be a sign of submission.

This is the same reason why your dog licks you and other older dogs.

It may seem unlikely that a dog may consider a cat superior. However, leadership in a pack is often more about personality than strength.

The motivation for such intra-specie relationships includes fear, genetics, resources, and conflict.

Dogs groom their bodies by licking. They also extend this courtesy to other people and animals they consider family. It is a sign of affection and acceptance.

If your dog is licking the cat, they are showing affection to the cat. It is proof that they consider the cat a member of the family or pack.

You may already know cats spend a disproportionate amount of their time grooming their body.

It, therefore, doesn’t come as a surprise that they wouldn’t mind getting help. But, of course, if the fondness is mutual, the cat can also return the favor and lick the dog. 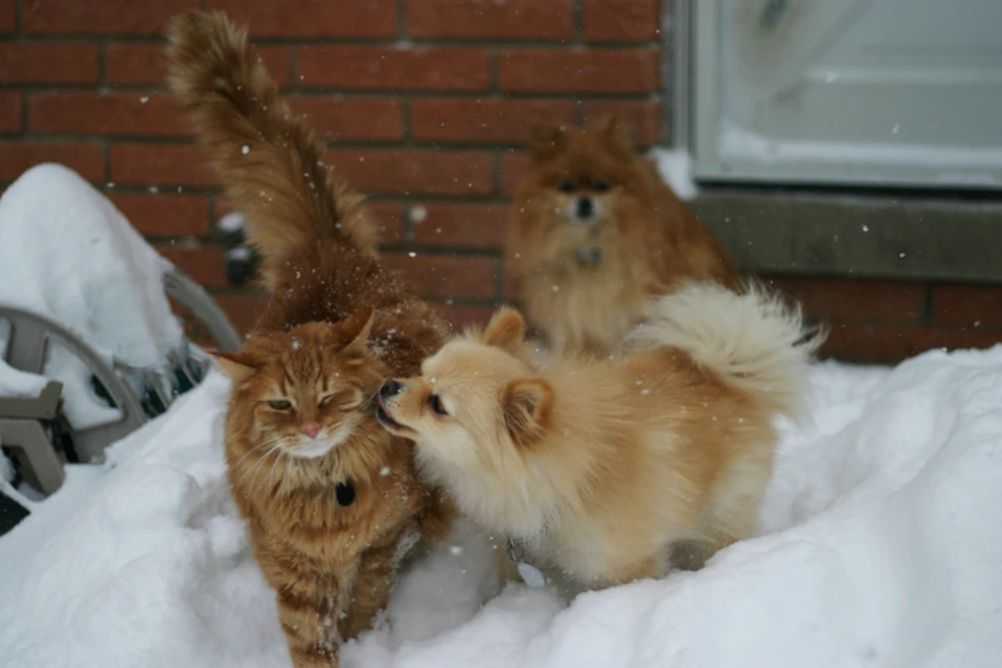 So the next concern would be how does your cat feel about the licking? The truth is there is no straight answer. The reaction from the act varies case by case.

The trick is to observe this interaction. Usually, the cats let out a warning hiss if they want none of it. This would be the best time to intervene before the interaction becomes violent. However, in most cases, the cat tolerates it.

Despite not enjoying it as much, the cat will sit through it and be fond of the dog. However, some cats, in some cases, can actually enjoy the grooming.

You can tell if they like it if they let out a purr in the process. They may even offer to return the favor and lick the dog back. If that’s the case, just let them be. It is one sign that the two like each other.

How Do You Know Your Dog and Your Cat Like Each Other? 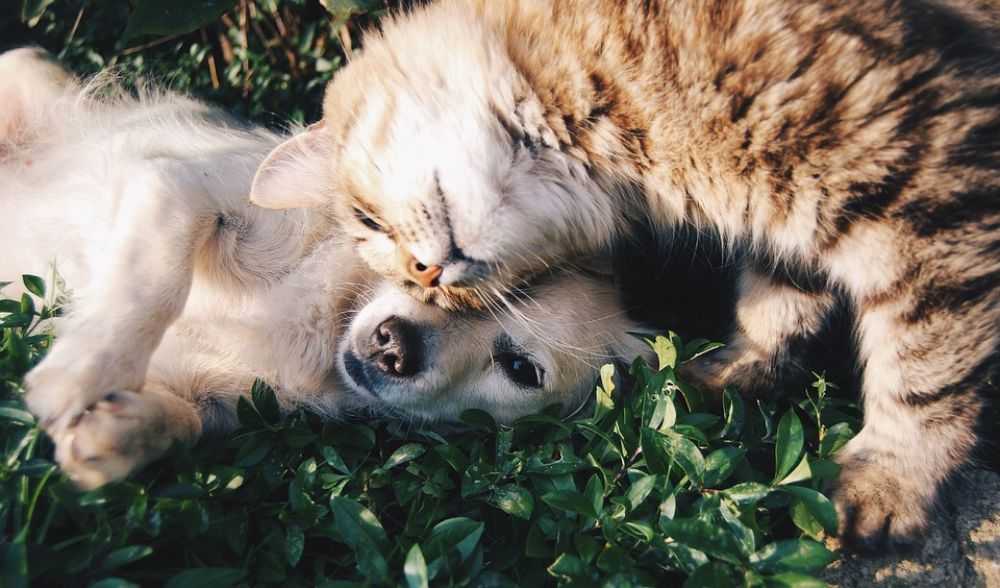 Not all dogs and cats get along. You can notice this if you have two dogs and a cat. The cat may be friendly to one dog and hostile to the other.

It is best to supervise their interaction if they don’t get along. But, on the other hand, separation may work even better.

So how do you know if your dog and cat are buddies? Here are a few tale-tell signs.

Does Your Cat Mimic Your Dog?

Studies have shown that mimicry in animals serves several purposes.

First, almost all animals, including cats, learn by mimicry. It is how babies learn to wink, and cubs learn to hunt. Mimicry may also be a sign of affection or adoration.

So if your cat mimics your dog a lot, then the cat must think the world of that dog. On the other hand, if it’s a kitten, then they may be trying to learn.

Either way, it’s a good sign. It shows they get along.

Younger animals tend to follow the older ones around. This is common among all animal species.

Pack animals such as dogs, lions, and wolves also follow each other around. The alpha or patriarch is often leading while the other follows.

Your cat following your dog around the house is a sign of friendship or even affection. It means they see each other as a pack or pride.

Do the Two Cuddle and Fall Asleep Together?

Both cats and dogs like to cuddle and get comfortable. However, cuddling each other is out of the question for most cats and dogs.

The only exception is when the two feel safe around each other. Then, they can be so at ease that they can cuddle and fall asleep together. It is the cutest thing you will ever see.

Do Your Cat and Dog Play Together Peacefully?

Cat and dog relationships are very delicate. Playing can turn into a bloody fight in an instant.

However, there is no danger of this happening if the two like each other. Each party learns the other limits, and they get comfortable.

The ability of the two to be around each other without fighting is a win.

A dog licking a cat is one of the cutest things you will ever see, as evident by the tons of such videos on the internet.

This is generally a good thing. It shows affection, acceptance, and friendship.

However, you should only intervene if it’s so excessive or the cat doesn’t like it.