By Aviram K.
Published in Training & Behavior
September 23, 2021
5 min read
✏️ This article has been reviewed in accordance with our editorial policy.
🏥 The information in this article is not a substitute for professional help.

We find our dogs doing the strangest things sometimes, one of which is walking into the bedroom to find your dog excitedly licking away at your favorite pillow…

Besides the initial “Ewww” to your pillow now being drenched in dog saliva, you might be wondering why your dog even wants to lick your bedding in the first place.

Dogs lick your pillow or bed because of sodium residues from the salt contained in sweat. Dogs enjoy the taste of it. Also, some dogs lack nutrients, feel nauseous, suffer from OCD, anxiety, or boredom, all of which can contribute to pillow or bed licking.

In this article, I will dive deep into this bizarre behavior and why your pup may be so inclined to licking your pillow.

Table of Contents
01
Why Your Dog Licks Your Pillow or Bed
02
Should You Stop Your Dog from Licking the Bed or Pillow?

Why Your Dog Licks Your Pillow or Bed 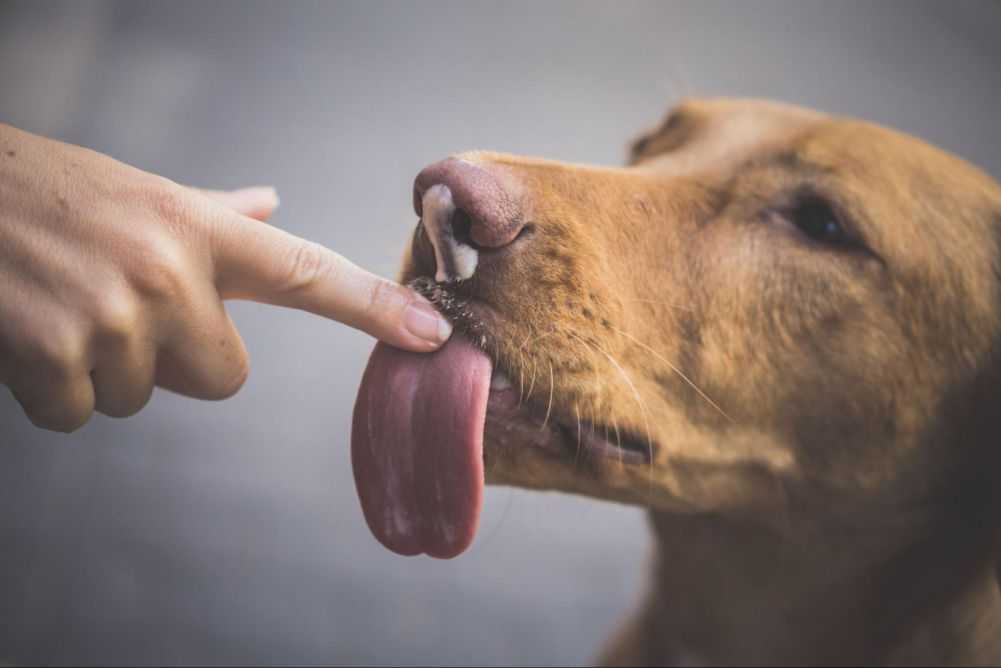 The sweat that oozes from our pores is rich in sodium, believe it or not!

The sodium component is released by your sweat glands to help balance the sodium inside of your body, and as a result, makes your sweat taste salty. We often get pretty warm at night on our pillow and will likely sweat it out, leaving all of that salty goodness on the pillow.

With dogs not having the same aversion to “eww, body fluids” that we humans do, they have no hesitation in licking up such a strong taste. Dogs’ taste buds begin to dance in delight and you end up with a pillow-licking fiend.

Sometimes, it isn’t even the sweat that draws the tongues near - body lotions and moisturizers can be just as compelling.

They May Be Nutrient Deficient

Diet can also cause your pup to turn to your pillow for some good ol’ licking. Licking the pillow can signify that your pup lacks something in the nutritional department or that they’re feeling nauseous.

If this behavior started after a sudden diet change, you might want to reevaluate what you’re feeding your pup. Consulting with a local veterinarian or canine nutritionist should do the trick!

If the food is something that you’re giving as a result of the guidance provided by the professionals, then it could just be a case of your puppy’s belly still getting used to new foods.

Dogs don’t seem to be great at switching foods, and it can be a bit of a process. Feeling nauseous can be a common reaction to a new food, no matter how good the food is. When dogs are nauseous, licking can help calm the unsavory feeling. The texture of a pillow may also help, which can be why a dog turns to that particular object for relief.

They May Suffer from OCD

Obsessive-compulsive disorder might sound like an exclusively human condition, but animals are prone to developing this as well.

To backtrack, obsessive-compulsive disorder (OCD) is a condition in which the afflicted has irresistible urges to do something they may not have otherwise wanted to do. The American Psychiatry Association described OCD as “having recurring, unwanted thoughts, ideas or sensations (obsessions) that make them feel driven to do something repetitively (compulsions).”

How this pertains to dogs is that pups who suffer from OCD will often repeat a behavior consistently, even to the point of causing themselves harm.

Licking a pillow incessantly and for long periods can very well be a sign of OCD. Dogs with OCD may also exhibit aggressive behaviors when you attempt to stop or prevent them from repeating a behavior consistently.

Some breeds of dogs are quite biologically predisposed to this condition, as a matter of fact, such as the Border Collie, a herding breed. This is actually where finding a reputable dog breeder is pretty important if you want a puppy of a certain breed. The propensity of OCD can be bred out or significantly lessened in breeds that were once quite prone to developing it.

They May Have Anxiety 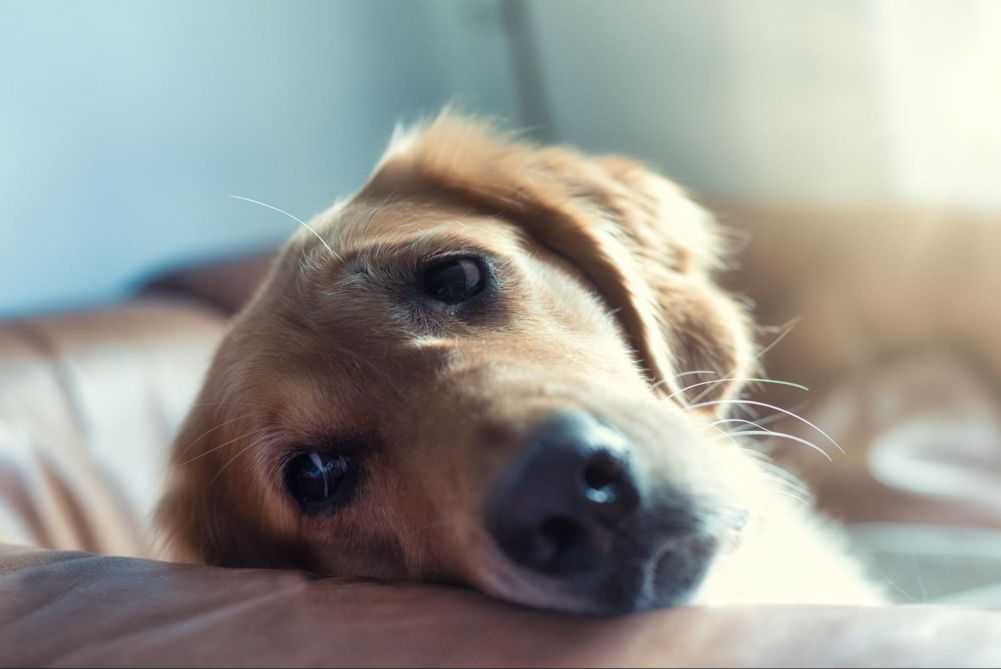 Anxious pups tend to display a myriad of weird behaviors that they’ve deemed as self-soothing. Licking a pillow can be one such habit that they’ve picked up to calm themselves down when feeling anxious.

Dogs can display anxiety over a large variety of things, from being away from you (known as separation anxiety), from fear of the vacuum cleaner, or a worry that they’re going to be punished for misbehaving.

The best way to determine if your pup is licking due to anxiety is to observe their body language and behavior before and after the licking.

If the licking tends to be consistent with your leaving of the house, you might have some separation anxiety at hand. If licking the pillow immediately follows taking certain household items out of the closet, it may be a fear over that item.

They May Be Itching from an Allergy

If your dog licks themselves frequently as well as turning their attention to your pillow, an allergy might be involved. When dogs are itchy, licking helps relieve the feeling.

Redirecting to your pillow can be another way in which they are trying to deal with the horrid feeling of being itchy! A dog may also redirect to a pillow if you’re consistently stopping them from itching their own bodies.

Itchiness, more often than not, has to do with an allergy. This can be an allergy to a food that manifests in irritated skin or something topical that has impacted your pooch.

Look for signs of red and irritated skin on your dog, and book a veterinary appointment to get your dog checked out.

You May Have Reinforced the Licking 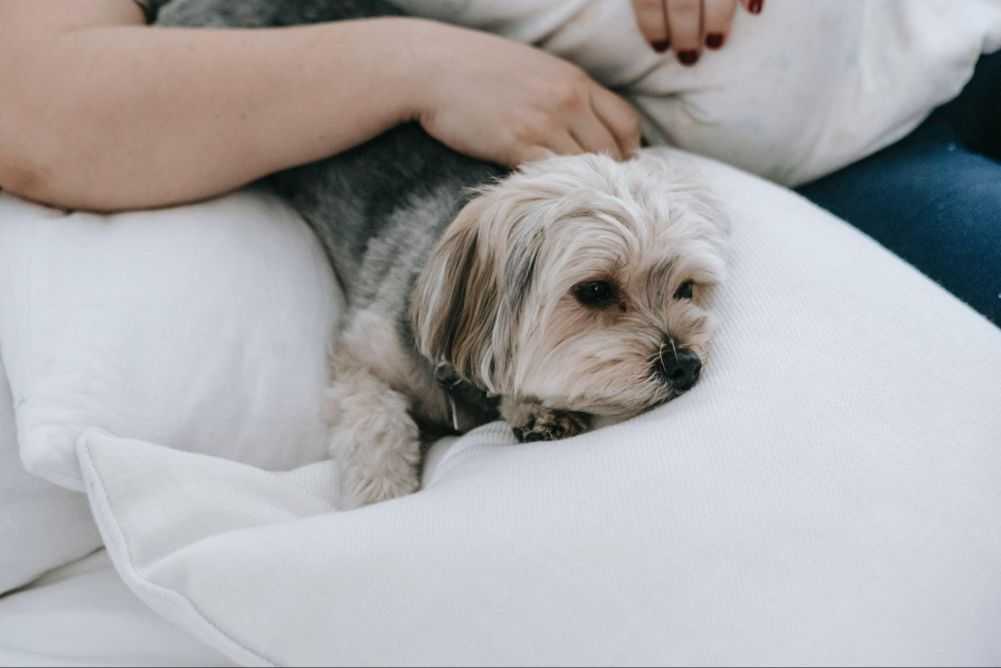 You, yourself, very well could be the reason your pup is licking the pillow. Unfortunately, dogs don’t always interpret our praise the way we think it should be interpreted.

You may have performed an action that made a lightbulb go off in your dog’s head that said, “my human likes when I lick the pillow!”.

This could be because you gave your pup attention when they started to lick your pillow, gave them a treat while they hammed away at your sheets, or otherwise encouraged them to do so.

You might not even have noticed your dog was licking the pillow or associated your desire to give them attention as positive reinforcement for their behavior. But in your dog’s mind, the two are very much correlated.

This is why being attentive when you give your dog praise becomes quite important!

They May Be Boredom

When boredom strikes, dogs become adept at finding ways to entertain themselves - often to our dismay!

Your dog might enjoy the sensation or action of licking your pillow, which to them, seems like a great way to satisfy having nothing better to do. This is similar to children getting into weird things because they can’t find something to entertain themselves with.

An excellent recourse to this is having plenty of great toys around, such as puzzle toys that make your dog work for something!

Playing games with your dog that stimulate their mind is another great idea, as a tired mind can sometimes be more effective than a tired body in getting your pup to settle down.

It Could Simply Be Food Crumbs 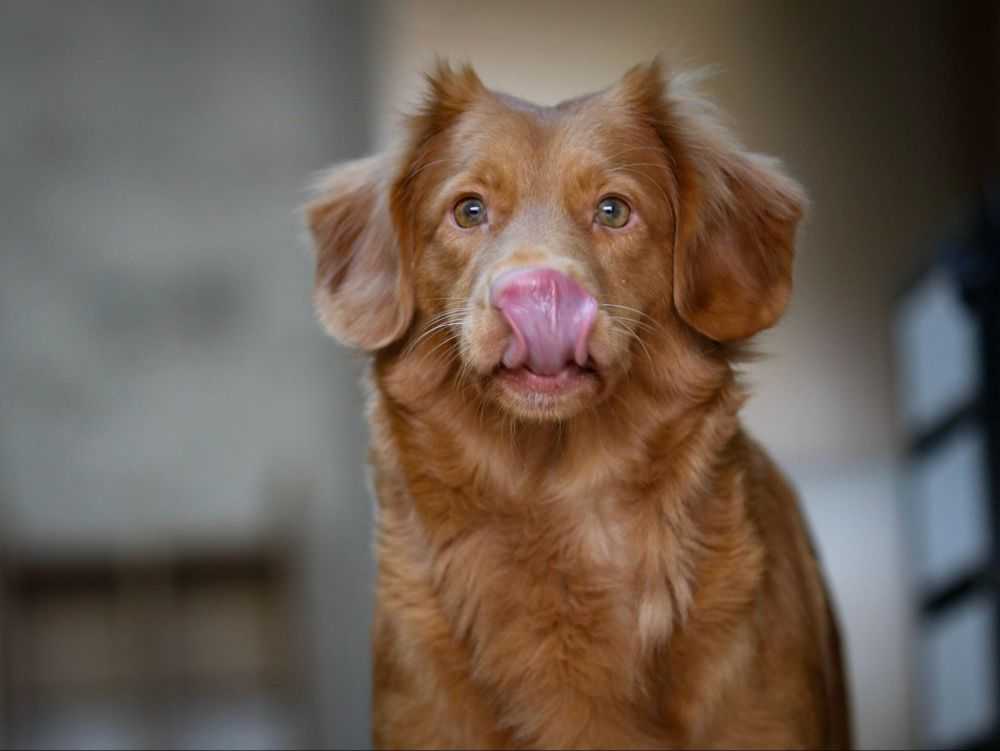 Yeah, sometimes the answer isn’t complicated at all. If you’re like most people who love to sneak a snack or two into the bed… your dog’s licking desire may simply be due to yummy crumbs being left behind on your pillow, bedsheets, and comforter!

Usually, small bits of crumbs here and there won’t harm your furry one, but still be careful not to eat foods that are dangerous to dogs so unsparingly, such as chocolate and avocado. Just something to be mindful of for their well-being!

Should You Stop Your Dog from Licking the Bed or Pillow?

If the act of licking is not due to a medical condition, you can stop it - if you want. It’s not particularly health-hazardous to lick the pillow or the bed, but it can be a gross or annoying action.

Redirect your pup’s licking behavior away from the pillow and onto a toy or something appropriate to lick.

However, if the licking habit is due to a medical condition such as nutrient deficiency, nausea, obsessive-compulsive disorder, or anxiety - you should definitely remedy the issue. By resolving the medical component, your dog should stop their licking habit naturally.