Why Do Dogs Sleep with Their Tongue Out?

By Aviram K.
Published in Training & Behavior
March 21, 2022
4 min read
✏️ This article has been reviewed in accordance with our editorial policy.
🏥 The information in this article is not a substitute for professional help.

Oh, the things you do while you sleep. You probably have some funny and strange habits you’re unaware of when you’re in beddy-bye land. Maybe you talk, sleepwalk or roll around recklessly!

If this is you, maybe you remember the day a chuckling parent, roommate, lover, or friend gave you the play-by-play of your bedtime antics. Whatever, glad they had a good laugh!

But you’re not the only one who does silly things while sleeping…you’ve noticed your pup has an interesting lights-out quirk of his own: he sleeps with his tongue out!

This adorable oddity might not be as wild as some of your sleep conduct, but you can’t help but wonder, what does this mean?

Curious to know why your pup’s tiny tongue keeps peeking out for a nightly appearance?

Come with me as I help you crack this unsolved mystery wide open.

Why Dogs Sleep with Their Tongue Out 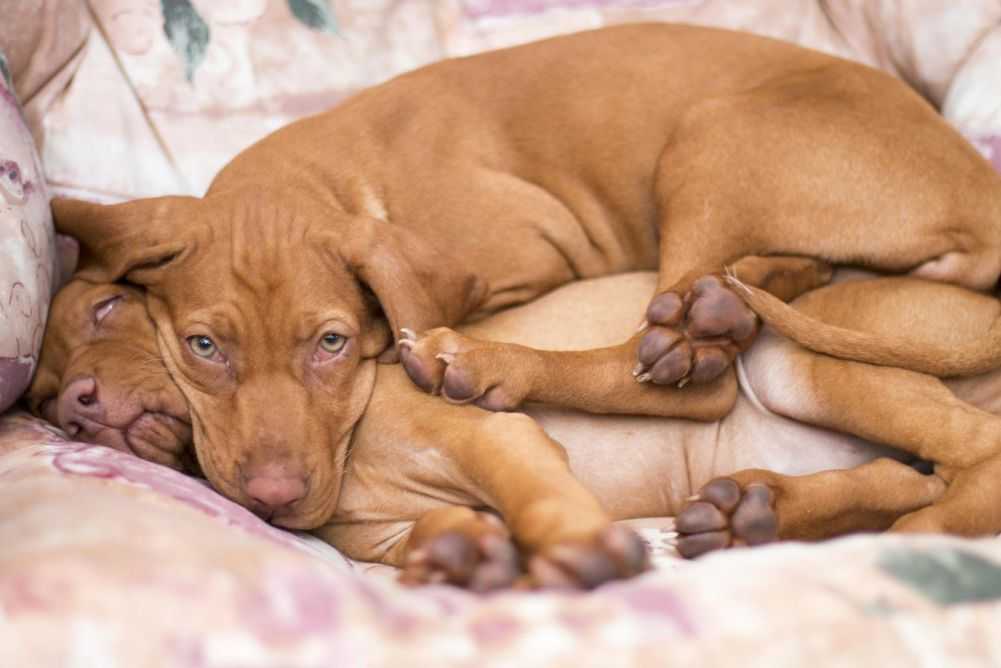 If you’ve noticed your dog seems to consistently love sleeping with their tongue out, there is most likely a reason behind what appears to be such a small thing.

First off, kudos to you for observing your pup so closely to notice this detail. And also for being caring and inquisitive enough to want to investigate!

Rest assured, there’s likely nothing wrong with your pup if he’s sleeping with this tongue out.

Here are some of the most common causes for this:

Let’s start with the most serious (yet rare) reason your pup may sleep with their tongue out.

Your dog may have something called Hanging Tongue Syndrome. This chronic condition is usually caused by neurological issues, a deformed jaw, or trauma to your pup’s muzzle.

If your pup has this condition, they may be sleeping with their tongue out because they have no choice! This syndrome makes it impossible for dogs to keep their tongue in their mouth where it belongs.

A dog with Hanging Tongue Syndrome is likely in pain, and you’ll probably notice they have other symptoms.

If you suspect your pup is suffering from this disorder, check for a dry, cracked, and chapped tongue. These symptoms and anything else abnormal that you see are reasons to take your pup to the vet to see what’s up.

Any dog can sleep with their tongue out. But did you know that there are actually certain breeds that are more prone to doing it?

Breeds that are commonly known to sleep with their tongues out include:

If your pup’s on this list, but you’ve never noticed them sleeping with their tongue out, keep an eye out…you just may catch them sometime!

It could be that your pup is sleeping with their tongue out for no real reason at all. This could just be part of their personality!

Each dog has their own unique little ways about them. If your pup is otherwise healthy, this may just be something they do. And you’re just blessed with a front-row seat to the nightly show of cuteness.

If your dog sleeps with their tongue out, they may just be a mouth-breather!

While dogs can breathe out of their mouths and noses simultaneously, they may be in such a deeply relaxed state that their mouth is doing all the work… 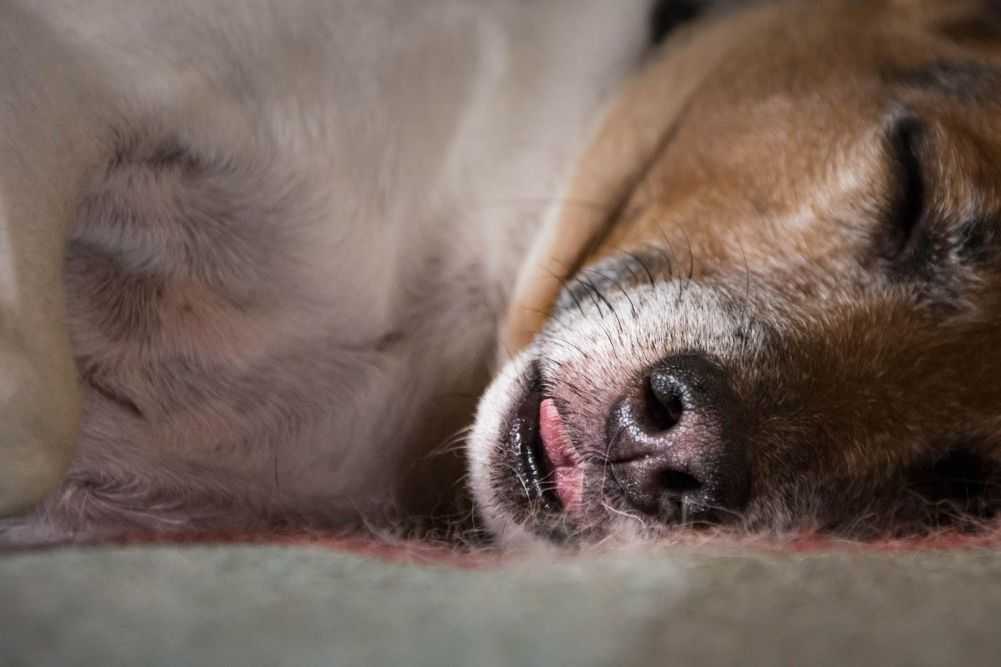 …which bleeds into the next reason: deep relaxation. If you’ve had a particularly active day with your dog, he may be sleeping with his tongue out because he’s exhausted!

This could be especially true if your pup doesn’t normally sleep with their tongue out. Your dog could be trying to breathe in the deepest breaths they can after a day of rambunctiousness!

So, it’s possible that as a result of your dog basking in this deep sleep, their tongue may be making a cameo!

If your dog has just been more athletic than usual, they may be sleeping with their tongue out because their body is still calming down.

For example, say your dog spent the day running about, especially in excessive heat. They were likely panting to cool their body down. When a dog pants, it increases their breaths and biologically can draw in more oxygen. Panting helps their breathing rate go up by 1000 percent.

When your pup pants, their tongue will probably be out. Even after your pup’s breathing has returned to normal and stable levels, their tongue may still remain out!

This may explain why your dog sleeps with his tongue out after a strenuous day of exercise.

Should You Let Your Dog Sleep with Their Tongue Out?

Maybe you’ve slyly tried to push your sleeping dog’s tongue back inside their mouth…but it’s staying put! So, since it looks like this tongue-out sleeping thing isn’t going anywhere, is it okay?

If you’ve confirmed with your vet that your pup doesn’t have Hanging Tongue Syndrome or any other problem, it’s totally fine for them to sleep with their tongue out.

Perhaps you flat out don’t like the way it looks.

That’s okay! It is understandable if you think it looks a little weird or sloppy that your pup sleeps with their tongue out. But it truly is normal and common for dogs to do this.

It may be one of those things that is just a part of who your pup is! Just like all of the other special and adorable things that make them who they are.

Tongue’s out? No Problem! 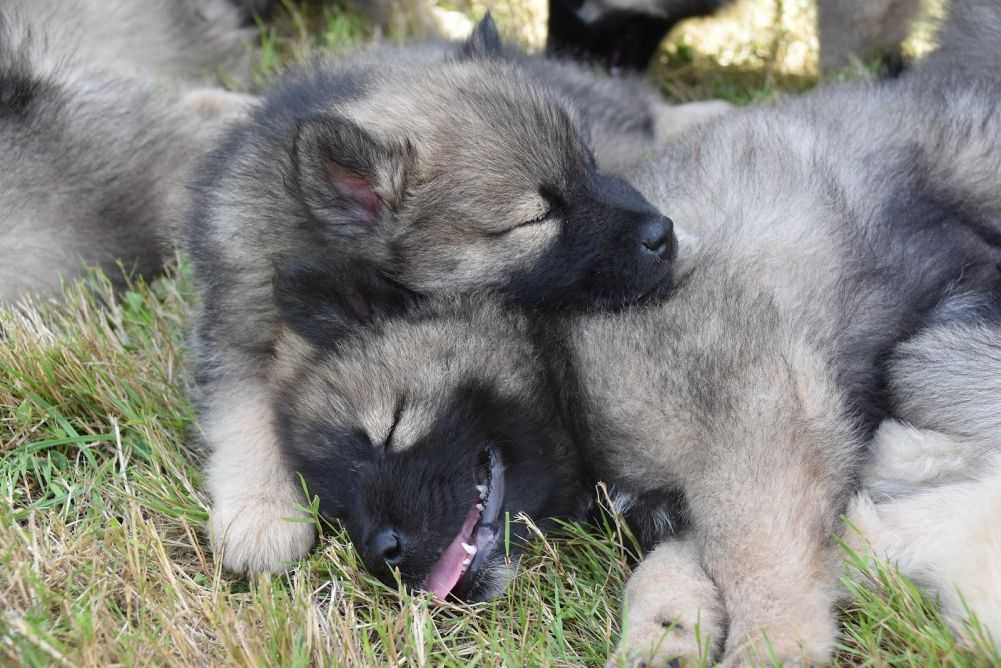 Maybe you’ve stared at your dog sleeping with his tongue popped out and wondered time and time again:

“Is he ever gonna put that thing away?!”

And the answer just may be: no!

Some breeds just sleep this way naturally! For other pups, this sleep posture just seems to be baked into their personality, a part of who they are. Or they may be simply enjoying some deep sleep.

Of course, your dog should always be examined by their vet if you sense deep down that something is off. They could be suffering from Hanging Tongue Syndrome.

But in most cases, your pup is fine! And if you find their tongue out ways off-putting, maybe try to keep in mind some of the things you do while sleeping are probably way more awkward!

Whether tongue in or tongue out, pleasant dreams!