Are Bears Related to Dogs?

Take a look at a particularly fierce guard dog and a National Geographic video of brown bears in the Kodiak, and, odds are, you’ll find yourself questioning whether dogs and bears are related somehow.

The answer involves looking at evolutionary timelines and deep history (in the millions of years):

Still, there are so many similarities between them: they both have prominent snouts, a penchant for a carnivorous diet, and even behavioral tics like running gait and sleeping postures.

To clear up any misconceptions about bear/dog relations, it’s worth our time to discuss a few of the similarities and differences between the species with a fine-toothed comb.

Table of Contents
01
Did Bears Evolve From Dogs?
02
Bears Compared to Dogs
03
Can Dogs Breed With Bears?
04
Where To Go Next?

Did Bears Evolve From Dogs?

There is no direct relationship between bears and dogs.

However, dogs and bears both share a genetic relationship in the Carnivora order, which encompasses a massive group of animals, including dogs, cats, bears, and even seals! Over 55 million years ago, both dogs and bears descended from this similar classification.

What characterized animals of the Carnivora order was a primarily meat-eating diet. Yet, as we move along genetic history closer to our current day, the Carnivora order developed into several subgroups. This branching process is common as species distinguish themselves.

Two main distinctions came about in the Carnivora order—facultative and obligative subgroups. What’s the difference?

It’s quite simple: the facultative group developed a broader diet preference. Members of this group developed scavenging abilities, meaning they could selectively digest berries and fruit when protein was scarce.

The obligative group grew smaller. They survived on a solely meat-based diet. However, most of the adaptable species developed into facultative members of the order. You probably could guess which species are included here—both dogs and bears.

Today, dogs—be it domesticated dogs or wolves—number among the Canidae family, a smaller family of species that covers over 34 species currently extant, from foxes to jackals to wolves. The Canidae family is an outgrowth of the larger, older Carnivora order.

Bears, on the other hand, sprouted out from the Carnivora order separately from dogs. While bears share several distinct comparable characteristics with dogs, it is primarily their meat-preferring diet (though not meat-exclusive), snouts, hair, and tooth patterns that make them nearly synonymous. However, they are not related directly.

Yes, many dogs have a similar appearance to bears and even share some behavioral similarities with them. However, our observations are based on the two species’ lifestyles, not their genetic make-up. And if we want to investigate the relationship between the two, we must turn to genetic history to find an appropriate answer.

Many people have wondered about the similarities between bears and dogs. This curiosity extends to the possibility of hybrid breeding between the two species and comments on their obvious behavioral comparisons.

Thankfully, there is more data available than ever that deals with these very questions. Looking past the genetic history shared between bears and dogs, let’s look at their modern-day comparisons. 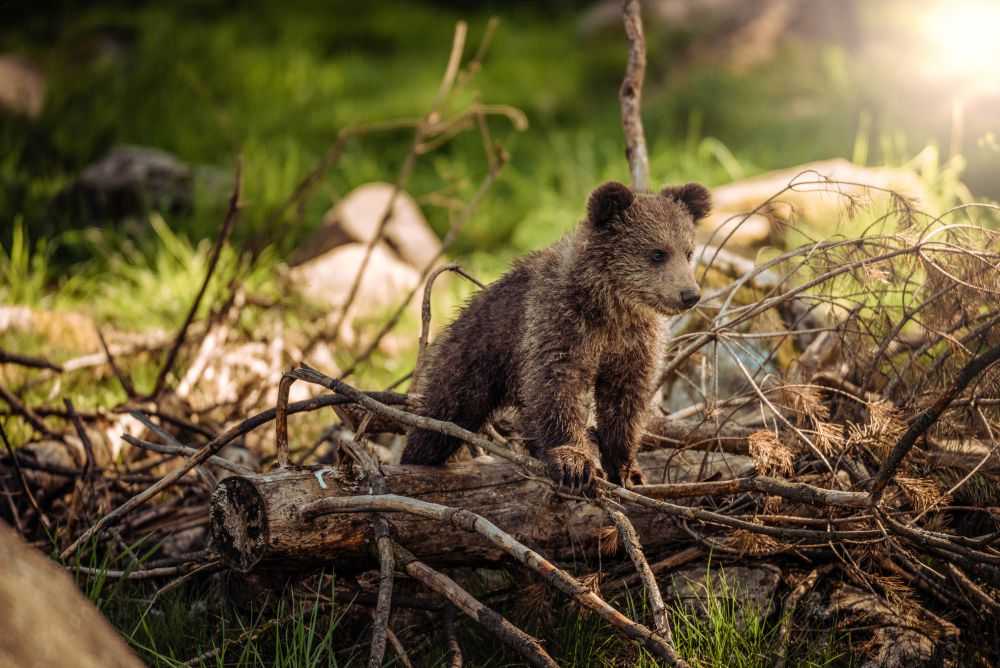 Bears are wild animals with fierce demeanors and inhospitable behaviors, right? How could we compare them to the domesticated dog, man’s best friend, the charming and loyal guardian of our artificial homes?

It turns out there is a wealth of behavioral and characteristic features that these species share. Almost enough to make us place them as relatives.

Dogs and bears today are quite different. However, their physical similarities continue to impress us. They exist on a primarily meat-based diet, share a common dental pattern, skull shape, and elongated legs and feet compared to similar carnivorous species.

We pride our dogs on their loyalty. But domesticated dogs have only part of the membership of the ancestral Canidae family make-up.

Many dogs indeed display courage and fierceness when put in a position to guard their property; wild canids behave quite differently. In fact, wild dogs—hyenas, coyotes, and wolves—display behavioral properties that bears do.

There is a special breed of dog called the Karelian Bear-Dog, which conservers in Nevada have employed from European stock. Park conservers use the Karelian bear dog to defend the parkland from rampacious or hungry black bears directly.

The confrontation between the dog and bear is dramatic and clearly articulates the behavioral difference between species.

Dogs are aggressive, territorial, and prone to attack when placed in a violent situation. Bears, predominantly brown and black bears, usually run away from confrontation. Though a Karelian dog may only weigh 35 pounds, even a small 200 pound black bear in this video from Minnesota will flee a fight.

Furthermore, bears display less expressive emotional behavior than dogs. Snarling, raising hackles, and expressive growling are not part of the bear’s repertoire. While bears possess extraordinary musculature and weight, they do not attack as dogs do.

Can Dogs Breed With Bears?

Dogs cannot breed with bears. The primary reason why a hybrid relationship is impossible between the two species is that they have different chromosomes—

bears have 74 while dogs have 78. Reproduction is impossible if the genetic make-up isn’t there.

Bears and dogs share a close genetic relationship, but that relationship is 55 million years old. Between that time and now, chromosomal changes, body types, and sexual compatibility have strayed away from each other.

If you’re interested in hybridizing dog and bear species, there are generally no opportunities for experimentation. However, Some Russian and Finnish experts have looked into the possibilities of a Canidae x Ursidae cross have collected an inventory of information that may be useful.

Where To Go Next?

The 2005 release of Grizzly Man exposed millions of viewers to the human side of bear behavior. In 2015, The Revenant displayed the savagery that bears are capable of in comparison to dogs.

It’s a continual problem to compare bears—that side of us that is wild and hungry—with dogs—our domestic side. The film has shown one answer, but the truth is more complicated.

Fifty-five million years ago, the category included bears and dogs as one was broader than it is today. Genetically, the two species are related from a long time ago.

Now, bears and dogs are different. They can’t reproduce, have more behavioral differences than similarities, and in some cases are direct opponents in the case of park conservation.

If you’re still interested in the genetic relationships between bears and dogs, check out the feline side of the ancient Carnivora order. Just like the dog-side of gene history relates to bears, the cat-side is just as impressive. It might lead you to a new fascination with the less-researched feline subgroup of this fascinating genetic family.