Police Dogs: What Makes a Dog a Good Police Dog?

By Aviram K.
Published in Dog Ownership & Care
September 21, 2021
6 min read
✏️ This article has been reviewed in accordance with our editorial policy.
🏥 The information in this article is not a substitute for professional help.

The police are here to protect and serve the public - with the help of their trusty canine officers!

Police dogs are an important part of public safety, helping detectives and officers stop crime, find lost people, and detect explosives before they go off.

Good police dogs are eager to please, obedient, fearless, aggressive when necessary, calm otherwise, and have a great sense of smell. Their duties range from apprehending suspects, detecting drugs and explosives, finding arson accelerants, searching for live victims, and finding cadavers. The Belgian Malinois is the most common breed used for police work.

In this article, I will look into what it takes for a pup to become a great police dog, why the Belgian Malinois is the breed of choice, and what police dogs do off-duty!

Table of Contents
01
What Are Police Dogs Used For?
02
What Makes a Dog a Good Police Dog?
03
Why Does the Police Often Prefer Using Belgian Malinois Instead of German Shepherds or Dobermans?
04
What Do Police Dogs Do off Duty?
05
Do Police Use Male or Female Dogs?

What Are Police Dogs Used For? 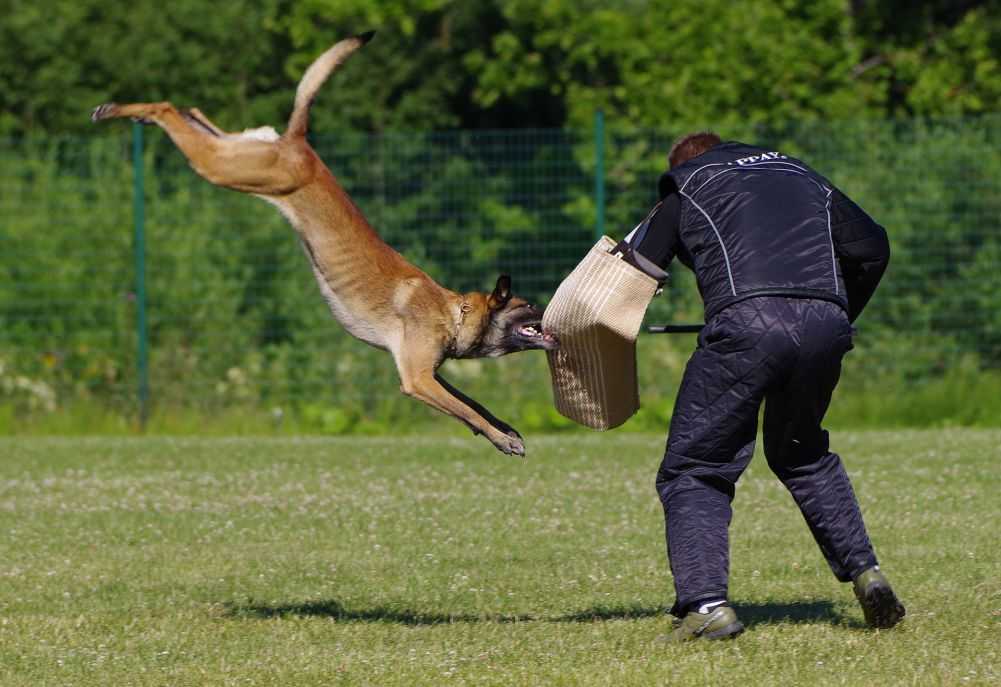 The incredible thing about our human and canine partnership is that we can utilize each other’s strengths and make-up for each other’s weaknesses. For K9 officers and their trust dogs, the duties revolve around taking advantage of the areas in which dogs excel over humans: their powerful senses and athletic ability. The most common uses for police dogs are apprehension, bomb and drug-sniffing, search and rescue, cadaver search, arson search.

Police dogs have great sniffers, powerful legs, and a bite to be reckoned with! As such, subject apprehension is one of the most popular duties that the public associates with police dogs (especially with the popularity of police dogs in action movies!).

Suspect apprehension is when the dog is sent out to hold the suspect with their bite until the police can fully apprehend them with handcuffs.

Dogs are sent out to chase the suspect and use their powerful mouths to hold them “hostage”. Police dogs are trained to bite and grip onto subjects and are often the first defenders of the public.

Their great noses help track the subject through shrubbery or city streets, powerful legs allow them to run faster than most humans, and that strong bite keeps the suspect from being able to escape.

Police dogs trained in apprehension put their lives on the line every time they chase a criminal, especially since the criminals may be armed.

Did you know that a dog’s sense of smell is (on average) 10,000 to 100,000 times more powerful than a human’s? It would only make sense to use this incredible biological talent for good.

As such, the K9 Unit has dogs trained in various detection principles, with the most used being bomb-sniffing, drug-sniffing, and arson.

Bomb-sniffing pups are sent into dangerous situations to uncover where an explosive may be hiding. Their acute sense of smell can sense the materials that bombs consist of, leading detectives directly to the source. Drug sniffing dogs do the same thing but are trained to find various illicit drugs instead of explosive materials. You’ll frequently find both of these types of dogs wandering around airports or sent into crime scenes. 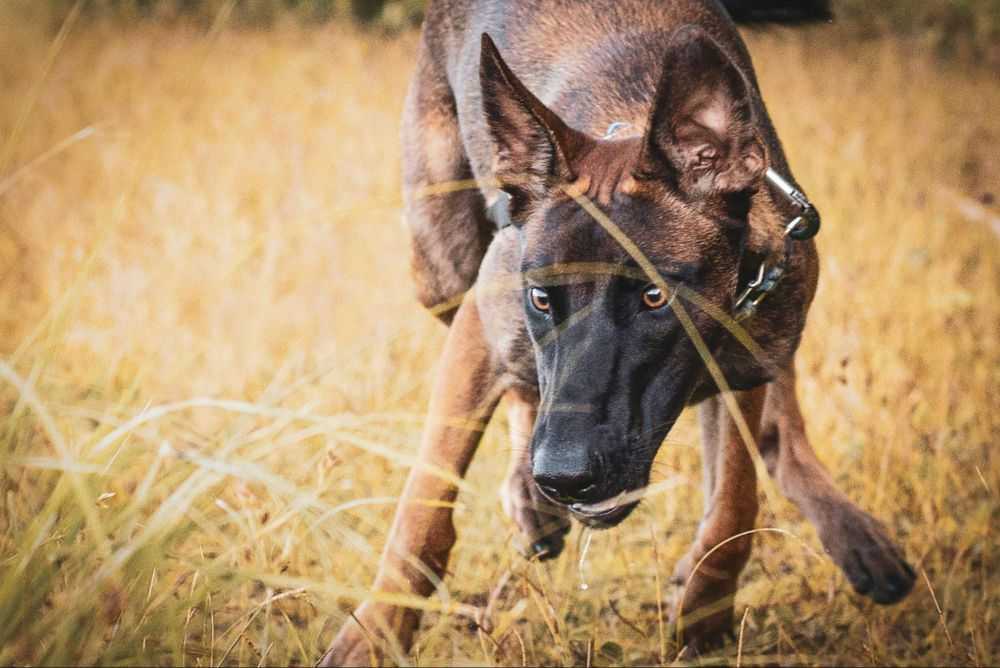 Continuing forth on that powerful sense of smell, police dogs can also have a duty in search and rescue. This is also a very big part of their job, as dogs are trained to find missing victims!

This ranges from leading the police to kidnapped children all the way to someone having gotten lost in the woods.

An officer will typically give the dog something with the victim’s scent on it and then send the pup out to find them!

Sadly, not all victims are breathing. Cadaver dogs have a very important duty of finding the already deceased.

Just like the search and rescue dogs, these pups are sent in to find bodies. However, instead of offering the dog something with the victim’s scent, they are trained to smell the dead and find them that way.

You’ll find cadaver search dogs searching in natural disaster areas or after an accident. For example, during the horrific date of 9/11, over 300 search and rescue and cadaver dogs were sent in to uncover the victims. These dogs worked tirelessly around the clock, and we continue to remember their brave efforts today.

What Makes a Dog a Good Police Dog? 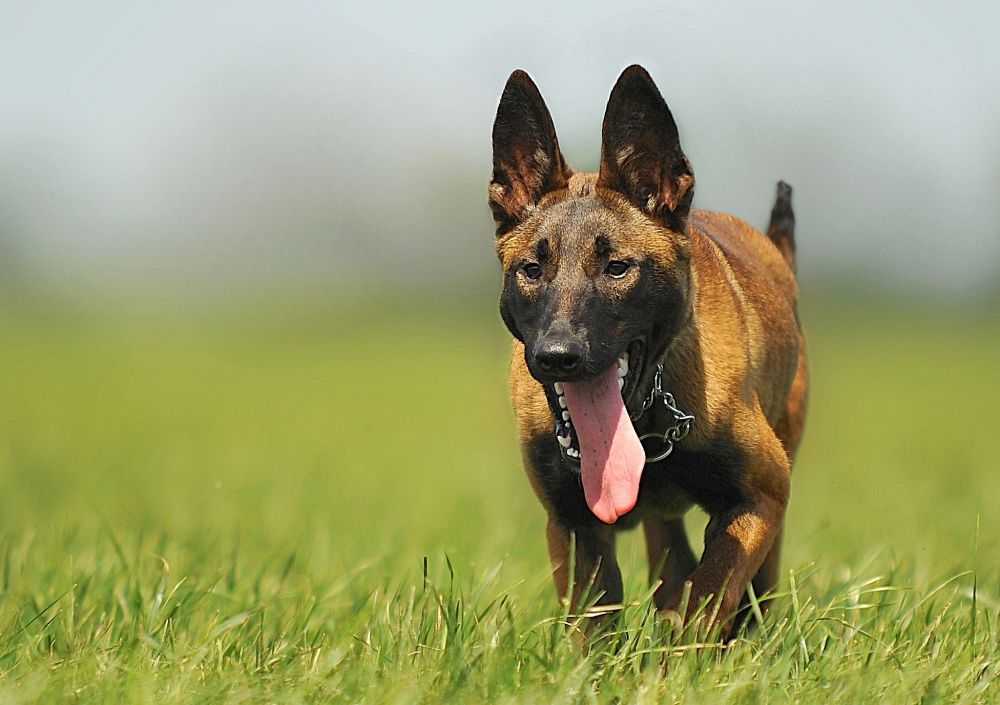 Successful police dogs are confident, intelligent, eager to please, affectionate with victims and handlers, and courageous against assailants.

Because of this, not all dogs bred for police dog work actually make the cut. There are several important characteristics and qualities that trainers look for.

Right off the bat, to be considered for police work, a wee little puppy needs to have a natural instinct that pushes them to be curious and interested in exercise and play. They cannot be lazy or unmotivated.

A strong hunting instinct is also a major plus, as this helps with suspect apprehension and other duties.

As they grow, trainers look for dogs that are very eager to please and learn quickly, are obedient, and have great mental problem-solving skills. They can logically work through what their handler is asking of them. These pups thrive on being rewarded for obedience.

Police dogs are not shy by nature and are very confident, as this leads to a lack of hesitation in being aggressive when necessary - such as with criminals. They also need to be protective. A superior sense of smell is also key, as this aids them with all of their duties!

Why Does the Police Often Prefer Using Belgian Malinois Instead of German Shepherds or Dobermans?

Traditionally, the public thinks of police dogs as tough protective breeds like the German Shepherd or the Doberman Pinscher. In actuality, K9 units favor a different dog breed: the Belgian Malinois.

Herding breeds are known for their intelligence and propensity to please people, all of which are big qualities in this breed. But being a shepherd-type, the Malinois has a very strong bite.

The Belgian breeds are also very quick in reflex and response, so most officers won’t see a delay between issuing a command and the dog doing the said command.

Lovingly called “maligators” by breed enthusiasts, the Belgian Malinois feels special-made for this line of work. Malinois don’t do well in average pet households due to their innate desire to work, and the K9 unit is a job they want to be a part of.

What Do Police Dogs Do off Duty? 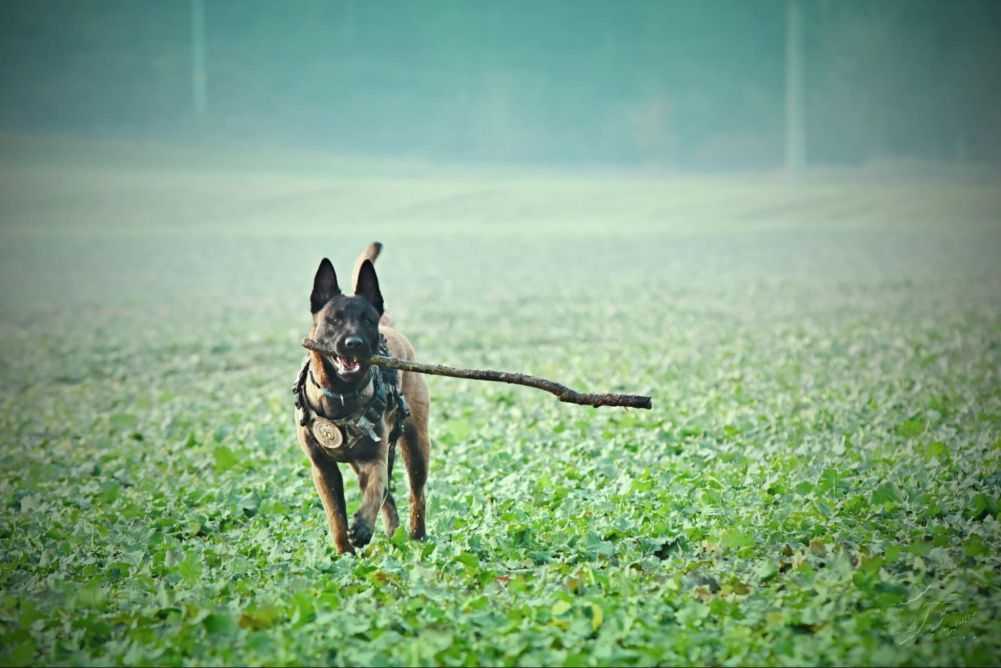 Don’t worry - police dogs aren’t all work and no play! Off duty, you likely wouldn’t even realize that pup saves lives every day.

The public may have a misconception that police dogs are simply tools used for work and then packed away into a cage with little human love. This isn’t the case! In many precincts, police K9s actually live with their handlers and become a big part of their family. At home, the pup becomes any ol’ pet - plays with toys, eats great food, and gets lots of pets.

At night, many of these dogs are kenneled in a comfortable crate so as to not feel spooked by any strange noises at night. Otherwise, they’re free to romp around!

Do Police Use Male or Female Dogs?

There is much discussion in the dog world on how much of a different canine gender makes on a dog’s trainability, behavior, and bond with their handler. As a general statement, both male and female dogs are used for police dog work. But, in reality, you will find more male dogs acting in the K9 unit than female dogs.

The reason for this gender discrepancy has to do with how biological gender alters instinctual and behavioral characteristics.

Female dogs are naturally more maternal and protective, which actually holds them back!

As shown by a Canadian study, female dogs tend to want to be closer to their handlers and are more reluctant to be sent off independently to apprehend a suspect or search through the rubble for drugs.

Male dogs tend to not have any issue being sent off far away from their handler to perform their duties, while female dogs are constantly checking back in with their person.

That being said, the above doesn’t automatically disqualify a female dog just because of her gender. Female dogs do have much stronger and more dependable bonds with their handlers, which is an asset.

As such, it’s just a different method of training and weeding out candidates when the pups are female!